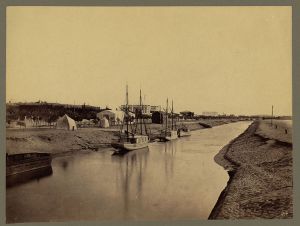 The Suez Canal is one of the most important maritime passages in the global shipping world.  It provides a short cut around the tip of Africa, saving weeks of travel time for large commercial shippers.  It was opened to traffic between Asia and the Mediterranean Sea in 1869.  And, it is a potential choke point!

The canal is a free flowing body of water, with no built in locks.  The north terminus is in Port Said and the southern terminus is Port Tawfik in Suez.  Today the canal is 120 miles long and 79 ft deep with a width of 673 ft, as of 2010.

The canal is the primary choke point between trade in Asia and Europe.  It was shut down from 1967-1975.  During those 8 years, all shipping was routed around Africa, or moved overland.  While 1975 seems like a long time ago, there is no reason to believe that the Suez will always stay open.  It already has a history of long closures.

The employees of the Suez Canal Company have started a sit-in strike.  The strike is starting with 6000 employees in the port cities of Suez, Port Said and Ismailia.  The strikers plan on sitting down on site, after their shift is over.  While their demands are typical of any organized worker, the ongoing revolution with a strike at the Suez Canal ratchets up the travel risk for any planned commercial traffic planning on using the Suez Canal going forward.

Bloomberg is reporting the strikers to be of subsidies of the Suez Company, allowing operations to continue normally during the strike.

Reuters is also reporting that the works in question do not have a direct effect on the canal operations. 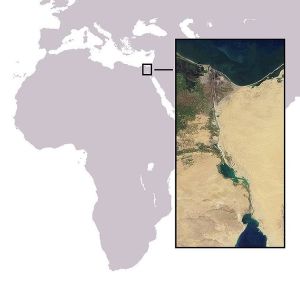 The canal currently handles the heavy tanker traffic between Europe and the Middle East.  This traffic is two way, with nations like Iran exporting crude oil, but importing up to 40% of their gasoline needs.  This two way traffic uses the canal to transship the products.

The canal is estimated to handle up to 2.5 million barrels of oil per day via large crude tankers transshipping the canal each day.  There is also an estimated 2.4 million barrels of crude capacity that is available using the facilities to unloaded/loaded at the northern or southern ports.

This second flow of products is delivered to the ports via tankers that are too large to use the canal.  Additionally, some ships will unload a portion of their cargo, and have it transshipped to the other end of the canal via the pipeline.  This allows ships to still use the canal, and carry an overall load that is larger than the canal max would allow.

The canal is reported to handle around 8% of the world’s GDP.  While a closure would slow down the flow of goods, it would not cause a drop in global GDP that large.  The US is reported to have about 3% of its GDP transship the canal.

While the global macro implications are large, the geopolitical risks are higher.  A closure of the canal, such that the US Navy was unable to pass through it would cause a change in the US forward deployment of forces.

The US Navy uses the Med as a safe location to park additional carriers, rushing them into the Red Sea as needed, to surge air assets during Gulf wars.  While the US has plenty of naval assets in the region, the closure of the canal would directly impact the US ability to surge assets as needed.

This would have obvious implications during an event that included hostilities in the region between nation-states. The revolution in Egypt appears to be gaining strength.

The canal is one of those locations in the world, where Global Macro economics runs smack into GeoPolitics.  Revolutions have funny ways of turning out differently than how everyone planned.

The Suez canal, and control of it will be at the top of someone’s list in the future.  It currently generates 3.4% of Egypts GDP.  That is not an insignificant number.  The canal gives everyone a vested interest in what happens next in Egypt.

Link of Interest to the Story

Keep An Eye On Crude Amid Strike Chatter

Roll out the barrel, oil scare is nothing new